In an official statement, Disney Channel's Executive Vice President Adam Bonnett said, "The strength of this series helped make 2013 Disney Channel's highest-rated year ever among tweens, an audience that is invested in the 'Austin & Ally' stories and the fun they experience on a journey with the characters. We're looking forward to delivering many more engaging stories soon." [2]

On February 6, Laura Marano, who portrays Ally Dawson, revealed that Season 4 would be the show's last season. She also revealed that the series finale would air in early 2016.[4]

After spending the summer apart, Austin, Ally, Trish and Dez are back and ready for senior year! Austin focuses on finishing school and just being a normal kid while Ally takes a break from touring to work on her next album. Trish questions her future as a manager while Dez contemplates going back to film school in L.A. But all future plans are put on hold as the gang works to open their own pop star academy to teach kids about performing and making music. 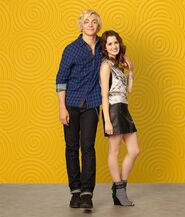 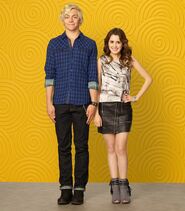 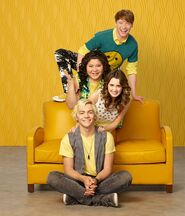 Retrieved from "https://austinally.fandom.com/wiki/Season_4?oldid=814419"
Community content is available under CC-BY-SA unless otherwise noted.