Raura (R/oss and L/aura) is the real-life pairing of Ross Lynch and Laura Marano. They appear to be very close friends and possibly might have secretly dated as they showed many hints that they did, and they are very comfortable with each other. They are good friends, because through different interviews they are teasing each other, joking around, and neither of them mind doing romantic scenes together. This pairing also seems to be the most popular and most loved real-life pairing in Austin & Ally and the most loved real-life pairing in Disney Channel tv shows

For the in-show pairing between Austin Moon and Ally Dawson, the characters Ross and Laura portray, see Auslly. 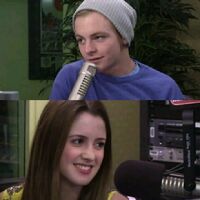 Ross and Laura have a close relationship. They seem to be very comfortable around each other. They both are pretty different, but that's what makes them best friends. They tend to tease each other a lot during interviews, videos, etc. Ross has said that him and Laura have such a great relationship that she will often try to set him up with other girls. Ross and Laura both said that they want Austin and Ally to end up together and Ross said that the kiss was good multiple times. Ross once said when Laura and him do a Auslly moment sometimes it is real and it isn't acting.

The Raura songs are possibly:

Laura and Ross's animal should be a dog because they both like dogs and people say Ross has a puppy-dog eye. Also, Laura had a dog and maybe she still has it.