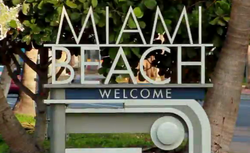 Miami Beach is a beach in Miami, which is located near Sonic Boom. The beach was first mentioned in Rockers & Writers. The beach is shown and also shows a sign that says, "Welcome to Miami Beach". A set for the beach did not appear until Songwriting & Starfish.

The episode that features Miami Beach the most is Songwriting & Starfish. They spend a lot of time at the beach in that episode when they are trying to get Ally to loosen up and have a fun experience at the beach. Austin also performs his song, Heard It on the Radio at the beach because there was a contest that if someone wrote the best song and performed at the beach would be heard on the radio. (Burglaries & Boobytraps) also when Ally tells her friends about when she was a little girl her dad and she went to a special show after they hear a song on the radio (Songwriting & Starfish). Neither of these times were on camera though. On the episode of Deejays & Demos, Miami Mac was there to interview Austin and Ally. In Filmmaking & Fear Breaking there is a small set where Dez was shooting his movie (Claws: Dun Dun Dun).

The first structure to be built on this uninhabited oceanfront was the Biscayne House of Refuge, constructed in 1876 by the U.S. Lifesaving Service at approximately 72nd Street. Its purpose was to provide food, water, and a return to civilization for people who were shipwrecked. The next step in the development of the future Miami Beach was the planting of a coconut plantation along the shore in the 1880s by New Jersey entrepreneurs Ezra Osborn and Elnathan Field, but this was a failed venture. One of the investors in the project was agriculturist John S. Collins, who achieved success by buying out other partners and planting different crops, notably avocados, on the land that would later become Miami Beach.

Meanwhile, across Biscayne Bay, the City of Miami was established in 1896 with the arrival of the railroad and developed further as a port when the shipping channel of Government Cut was created in 1905, cutting off Fisher Island from the south end of the Miami Beach peninsula. Collins' family members saw the potential in developing the beach as a resort. This effort got underway in the early years of the 20th century by the Collins/Pancoast family, the Lummus brothers (bankers from Miami), and Indianapolis entrepreneur Carl G. Fisher. Until then, the beach here was only the destination for day-trips by ferry from Miami, across the bay. There were bathhouses and food stands, but no hotel until Brown's Hotel was built in 1915 (still standing, at 112 Ocean Drive). Much of the interior landmass at that time was a tangled jungle of mangroves. Clearing it, deepening the channels and water bodies, and eliminating

native growth almost everywhere in favor of landfill for development was a herculean effort. The Town of Miami Beach was chartered on March 26, 1915; it grew to become a City in 1917. Carl Fisher was the main promoter of Miami Beach's development in the 1920s as the site for wealthy industrialists from the north and Midwest to build their winter homes here. In addition, Fisher built five hotels (none surviving). In the 1920s, Fisher and others created much of Miami Beach as landfill by dredging Biscayne Bay; this man-made territory includes Star, Palm, and Hibiscus Islands, the Sunset Islands, much of Normandy Isle, and all of the Venetian Islands

except Belle Isle. The Miami Beach peninsula became an island in April 1925 when Haulover Cut was opened, connecting the ocean to the bay, north of present-day Bal Harbour. The great hurricane of Sept. 17-18, 1926, put an end to this prosperous era of the Florida Boom, but in the 1930s Miami Beach still attracted tourists, and investors constructed the mostly small-scale, stucco hotels and rooming houses, for seasonal rental, that comprise much of the present "Art Deco" historic district.